First of all, let me tell you about the Earthday Haiku Contest.

2010 Bath Japanese Festival UK in association With Words (UK); Sketchbook Haiku Journal (USA); and Planetpals (Worldwide) are in partnership with the planet to bring the Earthday Haiku Contest.

The contest is designed to combine the love of earth with the sheer simple fun of writing Japanese haiku in English!

We call it the “Kids Count for Earthday” Earthday Haiku Contest 2010.  Kids will need to count 5-7-5 to create their Earthday haiku and help all of us to learn how to keep the planet clean and healthy!

The contest theme is “What Earthday means to you”.

The contest is open to individual students 7-20 years old.

Contest rules are shown on the Internet at http://kidsearthdayhaiku.blogspot.com/.

You can also learn more about haiku and Earthday  at this site.

Secondly, I refer to President Mineo Nakajima （中嶋嶺雄）at Akita International University（国際教養大学） in order to express a lot of thanks for the support of the Earthday Haiku Contest.

You will see what Dr. Nakajima has been doing as AIU President on the Internet at http://www.aiu.ac.jp.

Dr. Nakajima has also a clear understanding of haiku and feels a great love for haiku.

This is partly because his late father, Seiyo Nakajima （中嶋晴陽）, was one of the  haiku poets in Japan.

In 1990, Dr. Nakajima compiled a book of haiku by his father, titled Seiyo Kushu (晴陽句集).

Let me show you its front cover page and the last haiku by Seiyo Nakajima. 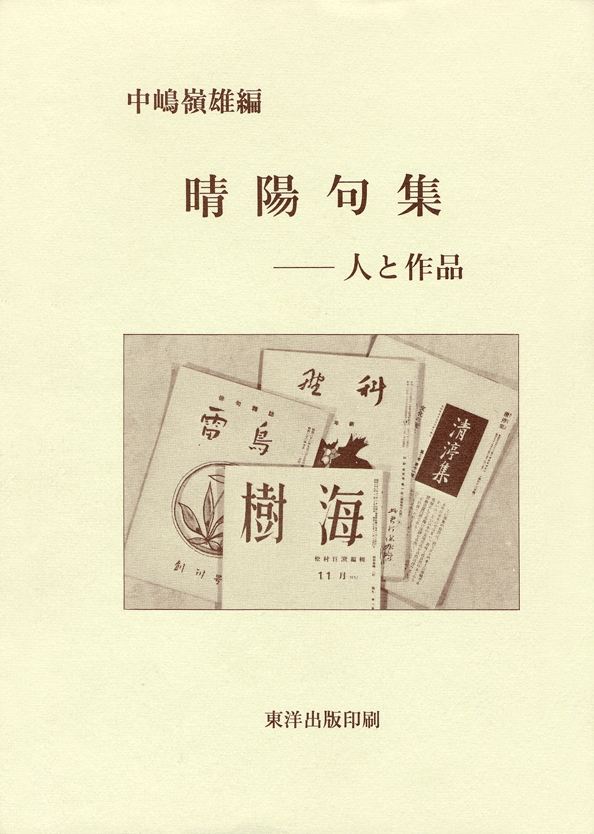 Dr. Nakajima has written articles or essays on haiku for haiku journals or the newspapers, and has appeared in NHK TV program on haiku these days.

He also contributed the article of congratulations on the first issue of the yearly pamphlet by Akita International Haiku Network.

This is its front cover page, in which his article is shown:

In this article Dr. Nakajima presented haiku he wrote during his stay in Nara, when he went on a school trip in his junior high school days.

Donald Keene, the ex- member of the President’s Advisory Board at AIU, kindly contributed his Japanese translation for Matsuo Basho’s haiku from ‘The Narrow Road to Oku ‘ by Matsuo Basho （ 「おくのほそ道」松尾芭蕉）.

Seishi sleeping in the rain,

Last of all, we sincerely hope that haiku will spread out to the world more because of its  brevity and its coexistence with nature.

We also hope that more children and more young people will get interested in and love haiku through this Earthday Haiku Festival.