In May, I took a stroll in the woods in Akita.  There I heard bush warblers singing in fresh green and I saw skunk cabbages growing in the marsh. 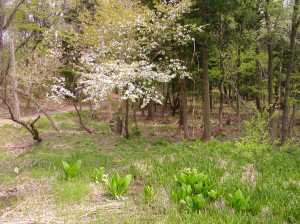 I felt as if I were in a natural temple, suddenly created in the woods, because it seemed as if there were bush warblers chanting sutra in the matins area, with skunk cabbages practising zazen meditation.

This strange natural sight made me hit upon the following haiku:

I would like to explain about bush warblers and skunk cabbages so that this haiku can be understood by our international audience.

The bird bush warbler is said to have been called 経読み鳥 (kyo yomi dori) before, which means the bird chanting sutra – which are called 法華経 (hokekyo), after the bush warblers’ song: “ho hokekyo, kekyo kekyo”.

The name skunk cabbage is used to refer to two similar kinds of plants: 水芭蕉 (mizubasho) and 座禅草 (zazenso). Both of them grow in a zazen-like posture, just as a monk sits in meditation, though they grow in different areas in mountains and have different colors.

Zazenso is also called 達磨草 (darumaso), which was named after Buddhidharma who sat cross-legged in silent meditation with his eyes ever-so-slightly open.

The legend says that Dharma practiced zazen and kept sitting in meditation for nine years at a temple in China.

Yes, at the very moment that I was having a stroll in the woods, bush warblers were chanting sutra, and skunk cabbages were performing zazen in tranquility.

Of course, the reality is that the bush warblers just happened to be there, and like most plants skunk cabbages are experts at staying still for long periods.

In April 2004, I wrote a haiku about bush warblers which appeared in the Asahi newspaper’s Asahi Haikuist network by David McMurray:

music in the eaves

There David McMurray noted as follows:

A spring fever is a sudden feeling of energy and a desire to do something new and exciting that you have when winter is finally over.  Hidenori Hiruta may have been in this kind of happy and energetic spring mood because he submitted several haiku about bush warbler songs.  When he was a child it was common for mothers to say, “Wait until the bush warbler sings before eating this year’s rice cakes.”

‘干し餅’, or hoshimochi are a dried, flat rectangles of rice cake that were traditionally tied by a straw rope and hung up from the eaves of homes in northern Japan.  Chilly spring winds would dry the cakes that were enjoyed in the past as much as chocolates and cookies are by children today.  Hiruta’s haiku combines past and present.

In 2005, Angelika Wienert, a German poet, quoted my haiku with Matsuo Basho’s haiku about bush warblers in order to show how the seasonal word bush warbler is taken up in Japanese haiku.

This is Basho’s haiku:

shits on the rice cakes

on the porch rail

Matsuo Basho composed this haiku in 1692 when he was 49 years old.  In those days the word ‘shit’ was said to have never been used in Japanese poetry such as tanka and haiku before.

Basho, however, dared to use this word in his haiku for the first time, which must have greatly amazed Japanese poets and poetry-lovers of the time. Maybe this is because Basho challenged the way in which poetry should be composed, believing that it should be done differently from the methods of previous days. It is said that Basho had a talent to use any word in his haiku poems, which made him the greatest haiku master in history.

One thought on “Basho’s bush warbler”