In the first posting, I took up Basho’s haiku from his travel diary The Narrow Road to Oku, 『おくのほそ道 (Oku no Hosomichi 』.

In his diary, Basho seems to have left Hope for us Japanese.

Here is another translation by Donald Keene （ドナルド・キーン）.

Here is a photo of the tablet of Basho’s haiku.

Donald Keene translated this passage and haiku into English as follows:

The two halls of the Chuson Temple, whose wonders I had heard of and marvelled at, were both open. The Sutra Hall contains statues of the three generals of Hiraizumi; the Golden Hall has their coffins and an enshrined Buddhist trinity. The “seven precious things” were scattered and lost, the gem-inlaid doors broken by the wind, and the pillars fretted with gold flaked by the frost and snow. The temple would surely have crumbled and turned into an empty expanse of grass had it not been recently strengthened on all sides and the roof tiled to withstand the wind and rain. A monument of a thousand years has been preserved a while longer.

furinokoshite ya      Spared you from their onslaught,

Here is a photo of the Golden Hall in the Chusonji Temple. 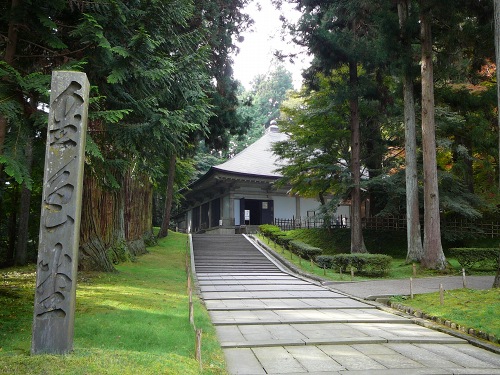 Donald Keene, who is well-known as a translator of 『おくのほそ道 (Oku no Hosomichi 』, is said to have often visited the Tohoku region while translating Basho’s diary into English and to love the Chusonji Temple in particular.

After the earthquake on March 11, Donald Keene decided to take Japanese citizenship and establish permanent residence in Japan.  This is one of the most encouraging and pleasing news to us Japanese.      Donald Keene, who is renowned expert in Japanese literature and culture and a professor emeritus at Columbia University, seems to be a symbol of Hope.

Here is a photo of Donald Keene taken at the final lecture at Columbia University on April 26, 2011 by Atsuko Teramoto (寺本敦子撮影). 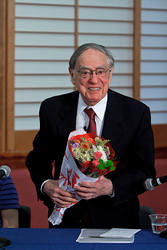 I want to be with the Japanese people. This is because the Great Japan Earthquake inspired the decision. Japan will surely resurrect itself from the disaster to become an even more splendid country than before, I believe. So I’ll be moving to Japan in a positive frame of mind.

Michinobu Yanagisawa also reported in the article as follows:

Born in New York in 1922, Keene attended Columbia University, where he became  fascinated with Japanese culture after reading an English translation of “The Tale of Genji （源氏物語）.”   He later served as an interpreter during the Battle of Okinawa in the closing daysof the Pacific War.   Keene has traveled through the Tohoku region many times, including some research trips for “The Narrow Road to Oku,” his English translation of the classic workof literature “Oku no Hosomichi,” by haiku master Matsuo Basho (1644-1694).   While studying in Japan, “I was surrounded by many people who warmly extended a helping hand to me,” Keene said. By obtaining Japanese citizenship, “I’d like to convey my sense of gratitude to the Japanese people, which I’ve so far been unable to do,” he said.                  Referring to reactions in the United States to the earthquake, tsunami and aftermath, including the nuclear crisis, Keene said, “Not a few people in the United States have been moved to learn Japanese people are doing their utmost to rebuild.” Even Americans who had no particular interest in Japan before March 11 have been impressed by Japanese people’s composure in the wake of the disaster, he said. “Americans have never felt such a strong affinity with Japan before,” Keene pointed out.  “I’ve made up my mind to become a Japanese citizen to be together with the Japanese people. I believe although words are important, of course, action is even more important,” Keene said.    “My decision to become a Japanese citizen is the manifestation of my expectations and convictions,” he said, explaining that he had a positive outlook for Japan. “When I returned to Tokyo eight years after World War II, Japan had revived to become a far different country from what I’d seen just after the war’s end. I’m convinced Japan will become an even more wonderful nation by weathering the hardships of this disaster,” he said.

Keene recalled a tour of the Tohoku region in 1955 to research “Oku no Hosomichi.” The view of a cluster of islets from the second floor of an inn in Matsushima （松島） [in Miyagi Prefecture（宮城県）] was unforgettably beautiful,” he said.   “I think there may be no structure in the world as beautiful as the Chusonji Temple [in Iwate Prefecture（岩手県）], so I wonder why UNESCO has repeatedly failed to designate the temple as a World Heritage site,” Keene said.     “I think how terrible it is that the Tohoku region, full of such beautiful places and temples, has been hit so hard by the earthquake and tsunami,” he lamented.

Here is a photo of the pond of Oizumi, the Motsuuji Temple in Hiraizumi.  (平泉・毛越寺 「大泉が池」) 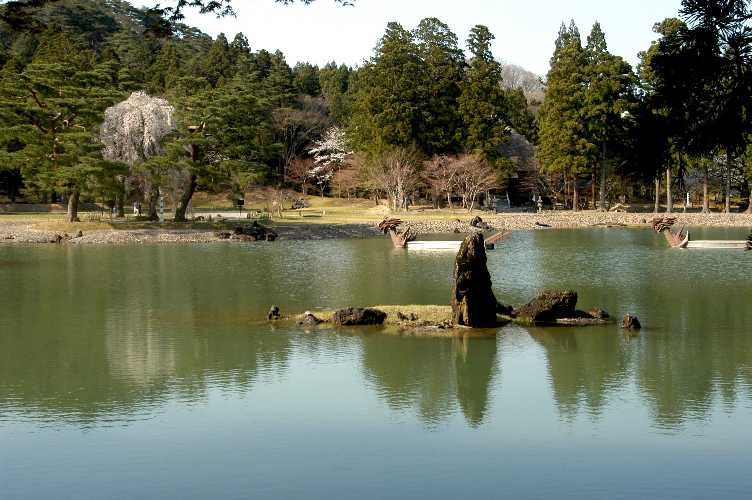 Looking back on his interaction with Japanese poets and writers, Keene referenced the poet and author Jun Takami（高見順）. Near the end of the Pacific War, Takami wrote in his diary of being deeply moved by the sight of people waiting patiently at Tokyo’s Ueno Station, trying to get to the safety of the countryside.   “I want to live together with these people and share death with them, as I love Japan and believe in Japan,” Keene said, quoting Takami.

“I now feel better able to understand Mr. Takami’s feelings,” he said.  Keene said his lawyer has already begun procedures for obtaining Japanese nationality.   He stressed that living in Japan would bring the most meaning to the rest of his life. He plans to spend time writing biographies of Hiraga Gennai （平賀源内） (1728-1780), a scholar of Western studies in the Edo period (1603-1868), and Takuboku Ishikawa （石川啄木）(1886-1912), a poet in the Meiji era (1868-1912).  In the 1950s, Keene studied at the postgraduate school of Kyoto University.     He forged friendships with such literary giants as Yukio Mishima （三島由紀夫）, Junichiro Tanizaki （谷崎潤一郎）and Kobe Abe （安部公房）.

In 2008, Keene was given the Order of Culture by the Japanese government in recognition of his contributions to promoting Japanese literature and culture in Europe and theUnited States.

The next posting ‘Haiku about the Great East Japan Earthquake (3)’ appears on May 14.

2 thoughts on “Haiku about the Great East Japan Earthquake (2)”