On July 15, we received two comments for ‘Akita International Haiku Network’ from Scotland. Mr. John McDonald sent his comments to us for encouragement, saying ‘Good Luck!’. He was the first haiku poet to send us comments and presented us with his haiku books. 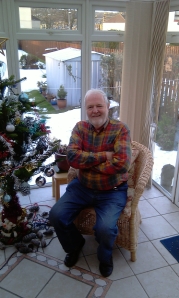 I’d like to take up one of his haiku books, whose title is ‘THE THROU-GAUN CHIEL’.

I post some of his haiku, showing my free translations of them in Japanese to you.

In his e-mail, Mr. John McDonald noted: In Scotland we have two languages one is Gaelic(which is a Celtic language) and the other – the one I write in – is a Germanic language brought to the British isles from Saxony ( old German ) It was the original english language and the original Scottish language ( in the lowlands of Scotland only – Gaelic was in the highlands )  The language was then refined in England, to become present day english, but in scotland it remained for many years ( mainly 17th, 17th centuries and then was replaced by present day english.) but a few of us like to keep the old language alive hence my poetry ( and some of it indeed still spoken in some areas).

Here I’d like to show you some scots haiku in his native language as well as in English, and my free translations of them in Japanese. I hope that you’ll enjoy scots haiku.

taking in the light

dreamt of a kite –

patched with a haiku

in the classroom window

Kyousitsu no  mado ni me wo fuku  sinne kana