We appreciate great support of JAPAN CENTER IN VLADIVOSTOK and Primorsky Region Government.

They have been calling submissions of haiku to 7th Japan – Russia Haiku Contest on their websites below.

The Report “Haiku Introduction in Vladivostok”

Here is a report by Hidenori Hiruta, whose title is “The Introduction of Haiku in Vladivostok”.

At the end of September, 2011, I had an opportunity to introduce haiku in Vladivostok, Russia. I left Akita on September 25 and arrived at Vladivostok that evening, staying till October 2.

During my stay there, Director OISHI Sohei of JAPAN CENTER IN VLADIVOSTOK as well as Ms. Suleymenova Aida, the associate professor of Far Eastern Federal University (Chairperson of Yosano Akiko Memorial Literary Society) kindly gave their cooperation, helping me introduce and spread haiku through school visits, workshops, and a talk.  Mr. Ilya Dyakov, a FEFU student, helped me with my activities as an interpreter and guide.

On the afternoon of September 26, I paid a courtesy visit to JAPAN CENTER and the Chair of Japanese Philology of Far Eastern Federal University Institute of Oriental Studies.

When I met Director OISHI Sohei and Chief of Chair Shnyrko Alexander, I delivered to them the message from the HIA president, Dr. Akito Arima, and presented them with HI No.94 and No.95. I told them about the aims of my visit, and asked them for their cooperation, hoping for a further spread of haiku in Vladivostok.

On my courtesy call, to my great surprise, I found the image of Buddha and the monument of YOSANO Akiko （与謝野晶子） and her poems Starting on a Journey（旅に発つ）, erected in the front garden of the FEFU Institute of Oriental Studies. There is also the monument of the Urajio Honganji Temple（浦潮本願寺）near the FEFU buildings. 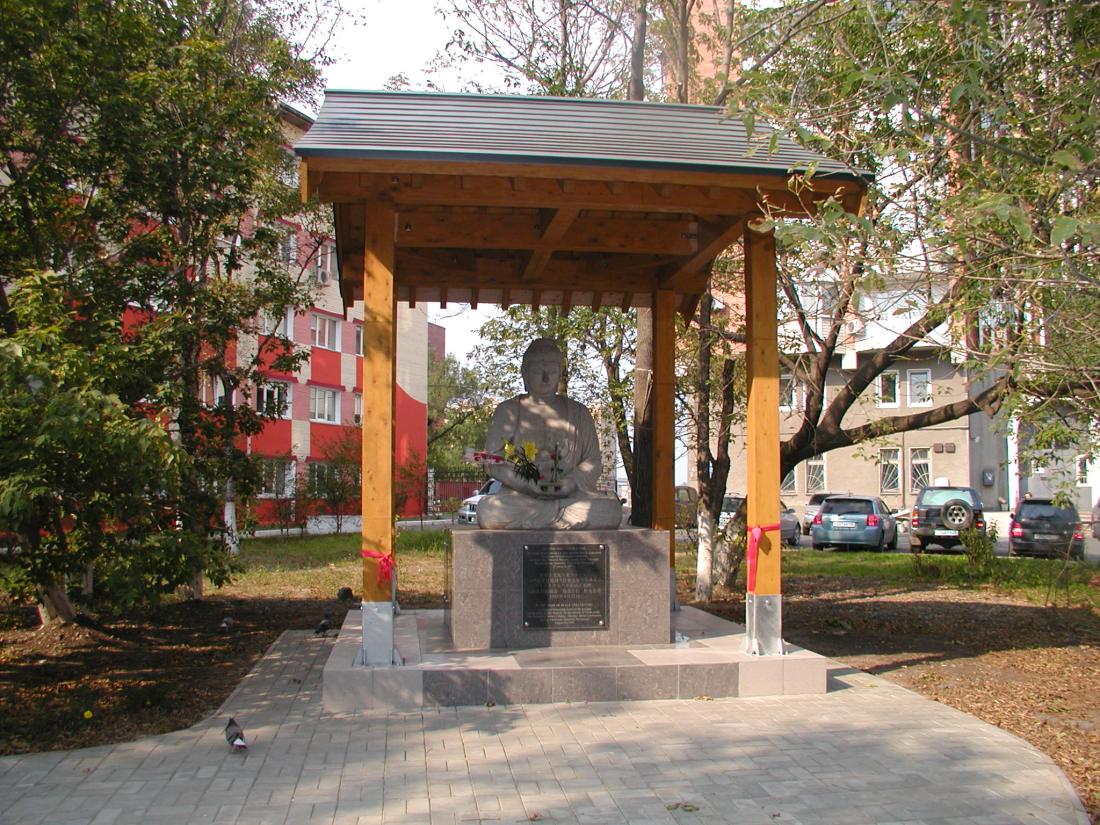 While staying in Vladivostok, I enjoyed talking about haiku to those children, students, and those who are interested in the Japanese language and Japanese culture. 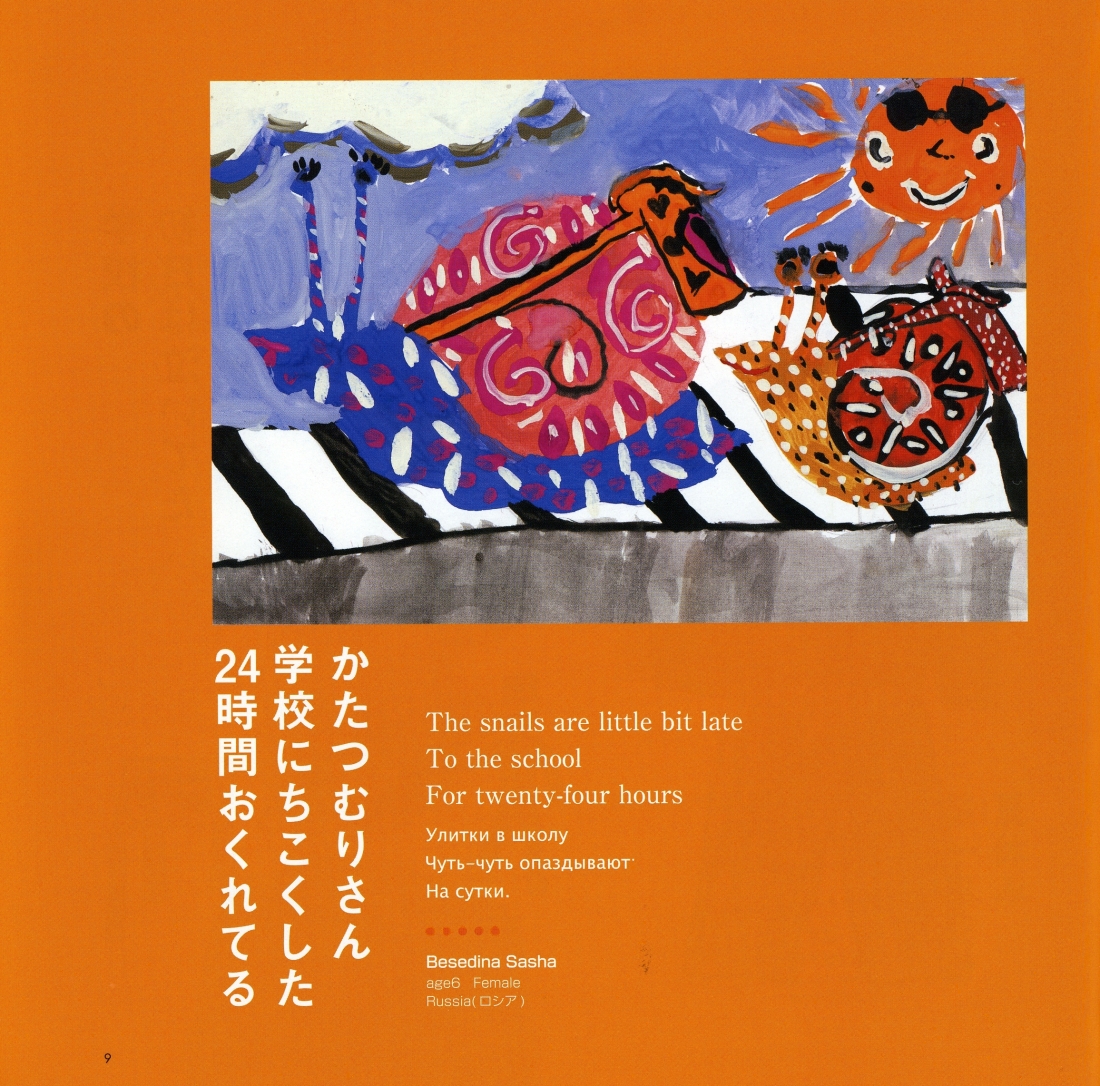 After that, I told about haiku to kindergarten children studying Japanese in two classes for 20 minutes. I taught the word ‘Haiku’ to them, and presented them with the haiku by a six-year old Russian child from ‘Chikyu Saijiki （地球歳時記）’ .

The snails are little bit late

Laughter spread in the classroom with the translation by a FEFU student.

In a class for elementary pupils (from the age of 7 to 9), who study Japanese as their selective subject, I enjoyed the haiku lesson for 60 minutes. I presented several haiku and pictures by Russian children from ‘Chikyu Saijiki （地球歳時記）’.

The pupils enjoyed reading each haiku in chorus in Japanese as well as in Russian.

I also presented them with the haiga copies painted by an elementary pupil in Akita prefecture as well as the haiga postcards by AIU students.

The pupils enjoyed drawing a picture or writing haiku for ‘World Children’s Haiku Contest’ by the JAL Foundation, whose topic is ‘Festivals’. 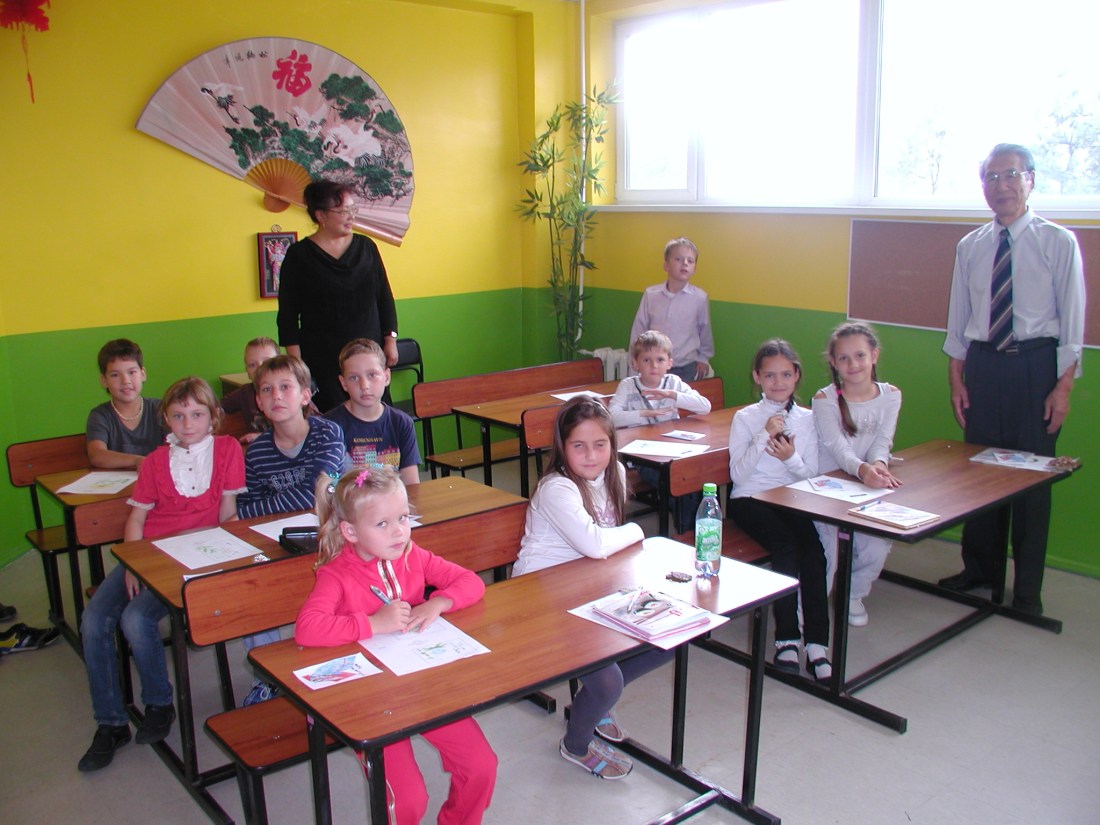 I gave the four-day workshops of 90 minutes on writing haiku, short poems, for the FEFU students at the FEFU School of Regional and International Studies.

After the workshops the teachers gave me their comment, saying that they will take up haiku in classes from now on.

The students gave a presentation of their haiku composed in Japanese and Russian, which was very highly motivated and fluent.

I found that the students prefer those haiku which are humorous or ironical.

They like haiku, whose implication has something light, far from serious.

The following haiku by Basho pleased them most, causing laughter.

Shits on the rice cakes

At Japan Center, I gave a talk on ‘Haiku and Tea Ceremony’ to the members of the Tea

Club ‘Ichigo Ichie no Kai（一期一会）’  formed for the cultural course.

Before the talk, they served me a bowl of green tea made through the tea ceremony style. 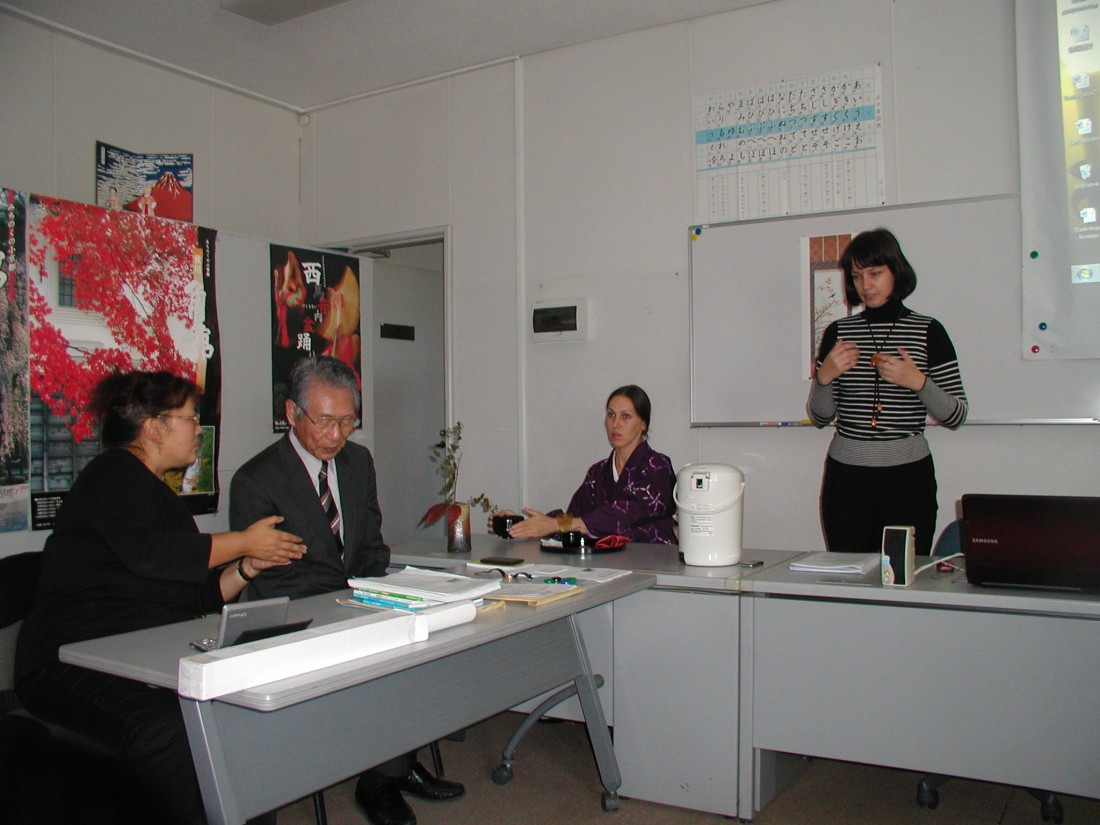 Then I recited my haiku I had written in the Shinkansen for Tokyo on September 25, which took up the words ‘treasure-like wind’ used in the folk song ‘Obonai Bushi’.

After that, I started talking about ‘Haiku and Tea Ceremony’.

First of all, I presented the audience with several haiku by Basho.

The first haiku was the one written in Kisakata （象潟）, Akita Prefecture.

Seishi sleeping in the rain,

The last haiku is well known all over the world.

A frog jumps in –

I took up ‘the sound of water’ in Basho’s haiku, comparing the sound with ‘the sound made in mixing the powdered green tea with the hot water by a bamboo tea whisk’ in the tea bowl at tea ceremony.

I told that Zen has had a deep influence on both haiku and tea ceremony.

After the talk they gave me the comment, saying that they will take up ‘Haiku and the Season Words’ as the topic in the following cultural course.

This is because my talk caused a great sensation among the audience, I hear.

As a special guest Ms. Semyonova Larissa, a haiku poet, living about 750 kilometers away from Vladivostok arrived at Japan Center by bus and train.

Ms. Semyonova, whose pseudonym is ‘Isa’, is a Facebook friend of mine, who lives in Primorsky Krai, teaching haiku to children at the circle on Japan she formed as a volunteer for an elementary school.

Here is her haiku.

March of a heavy snowstorm,

A friend in Tokyo says,

“The dishes are broken”.   (Isa)   (Translated by Hidenori Hiruta)

Last of all, I sincerely hope that cultural exchanges like this will increase on the Internet among haiku poets worldwide, and that haiku will be loved more and more not only in Russia but also in any other country in the world.

Here is a website address, where the report by Hiidenori Hiruta is translated into Japanese.

It was put on the website of HAIKU INTERNATIONAL ASSOCIATION.