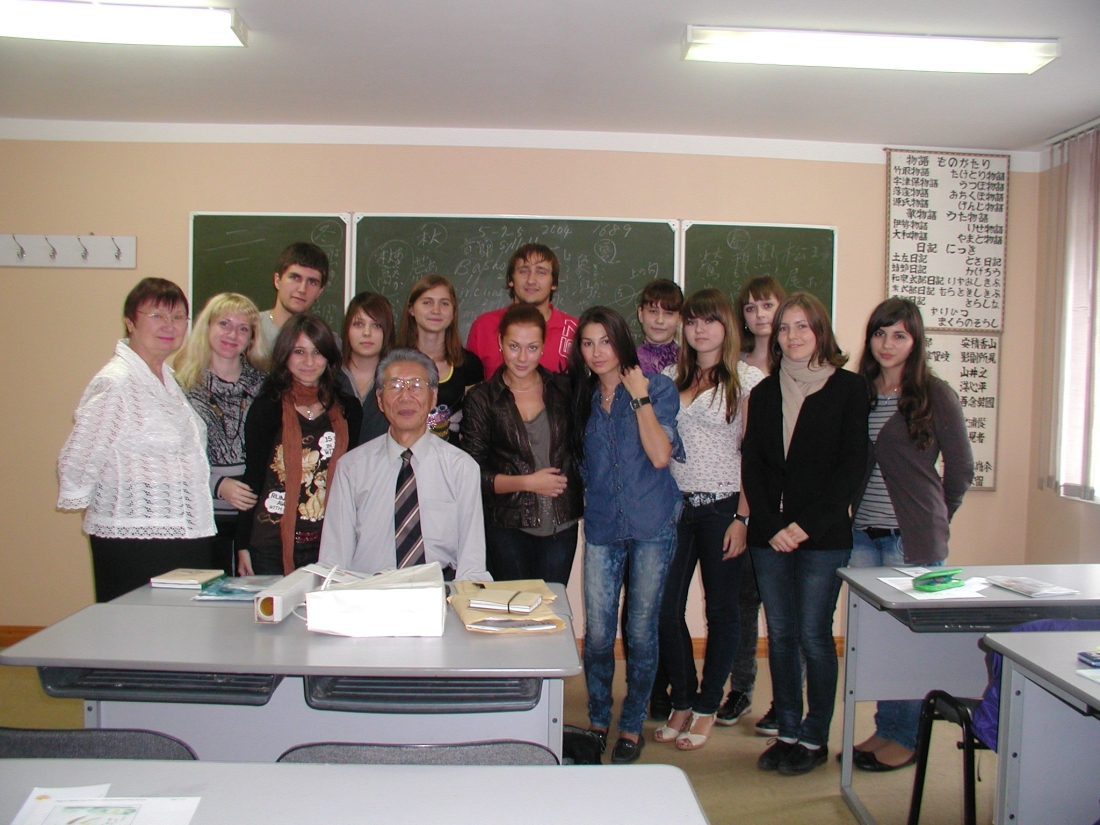 This is a photo of a haiku workshop for the group of Professor Tatiana Breslavets, Japanese literature and Philology Group at Far Eastern Federal University.

From September 25 till October 2, 2011, Hidenori Hiruta, a member of the Haiku International Association (HIA), whose president is Dr. Akito Arima, had an opportunity to introduce and share haiku in Vladivostok, Russia.

His visit there was supported by Akita Prefecture and Akita International University as well as by the Haiku International Association and the JAL Foundation.

Hiruta told Director, Sohei Oishi and Head of the Chair, Alexander Shnyrko about the aims of his visit, and asked them for their cooperation, hoping for a further spread of haiku in Vladivostok.

In his visits to Eastern School, Hiruta told about haiku to kindergarten children and elementary pupils who study Japanese. The children enjoyed reading haiku in chorus in Japanese as well as in Russian. They also enjoyed drawing pictures  about haiku.

In Japan Center in Vladivostok, Hiruta gave a talk on “Haiku and Tea Ceremony” to the members of the tea club “Ichigo Ichie no Kai” formed for the cultural course.

The articles on Hiruta’s activities for cultural exchanges through haiku in Vladivostok have appeared in the following homepages of the Japan club at Japan Center in Vladivostok and the Haiku International Association in Tokyo.

Hiruta gave four-day workshops of 90 minutes on writing haiku, short poems, at the FEFU School of Regional and International Studies. Students learned to write haiku through these workshops.

It says as follows.

The workshops were conducted by “Haydzin” Hiruta Hidenori — a poet who writes haiku specially arrived to Vladivostok. Students, studying the Japanese language, listened with interest to the explanations of how to write haiku in various languages — Japanese, English and Russian, and then created their own poems.

Mr. Hiruta arrived from Akita Prefecture, which has friendly relations with Primorsky Region. Next year there will be the 20-th Anniversary of sister-relationships between Akita and Vladivostok. Universities in these cities have students and teachers exchange agreements, so Far Eastern Federal University students may participate in the Haiku contest in Russian, as well as in Japanese and English. Winners of the competition have a real opportunity to go to Japan.

Such cultural exchanges as this caused a great sensation there in Vladivostok, making them more interested in haiku and inspiring them to write haiku.

This is why the Akita International Haiku Network is pleased to launch the Japan-Russia Haiku Contest, as an opportunity to share haiku related to the theme of “the sea”.

The organizer hopes that this contest will serve as an opportunity to deepen mutual understanding among people, to promote the interaction of people’s views on Japan and Russia, as well as to convey the enjoyment of writing and reading haiku.

The organizer also hopes that it will serve as an opportunity to strengthen and develop the sister city relationship between Akita and Vladiovostok, as well as to promote and increase comprehensive exchanges such as cultural, economical, medical, agricultural ones between Akita Prefecture and Primorsky Region.

As mentioned in the homepage of Far Eastern Federal University, Akita Prefecture has friendly relations with Primorsky Region. In March, 2010, Akita Prefecture and Primorsky Region concluded the treaty that there should be more exchanges promoted and increased between them. This treaty reminds Hiruta of those fruitful exchanges the ancient people had by way of the northern sea route from the 8th century till the 10th century. Japan is said to have started trading with Balhae（渤海） by ship in those days.

One of the most popular haiku related to the sea was written by Matsuo Basho in 1689 . Basho’s haiku is found in his travel diary Oku no Hosomichi ( The Narrow Road to Oku).

Across to Sado stretches

Original, previously unpublished haiku referring to some aspect of the sea should be submitted according to the entry form.

Japanese haiku poets should write haiku following traditonal styles in the Japanese language, having season words. And they have to add its Russian and English traslations.  Otherwise, they could leave a message in each translation blank : I would like the organizer to translate haiku into Russian or English.

Russian haiku poets should keep in mind that haiku is considered to be the shortest poem in the world, and submit haiku with a length of three lines in the Russian language. Season words are not essential. And they have to add its Japanese and English translations.  Otherwise, they could leave a message in each translation blank : I would like the organizer to translate haiku into Japanese or English.

Limited number of entries: Only one haiku may be submitted per haikuist.

Please download the entry form below and submit it by email to: shhiruta@nifty.com

Kyoko Uchimura, a dojin of a haiku group : Ten’I (Providence) by Dr. Akito Arima, and also a member of Haiku International Association

Grand prize a winner gets is called “Rogetsu Sanjin International Award”.  Rogetsu Sanjin is another pen name of Ishii Rogetsu（石井露月）, one of the great haiku poets in Japan Akita ever produced. Rogetsu is a pen name, whose real name is Ishii Yuji (1873 – 1928). This haiku contest is held partly because of celebrating the 140th anniverasay of Ishii Rogetsu’s birth.

Each winner is presented with Haiku By World Children edited by the JAL Foundation as an award.

*The contest winner will be notified by email from the organizer and be given further details of the round-trip prize. Please note that the winner may have to cover some of the travelling costs.

Here is a photo of Rogetsu’s haiku related to the sea.

the field is green –

Lastly, here are two photos of the sunset, which will surely inspire you to write haiku related to the sea.

The first one was taken from a hotel facing Amur Bay, Vladivostok City.

The second one was taken from Katsuhira Hill facing the mouth of the Omono River, Akita City. 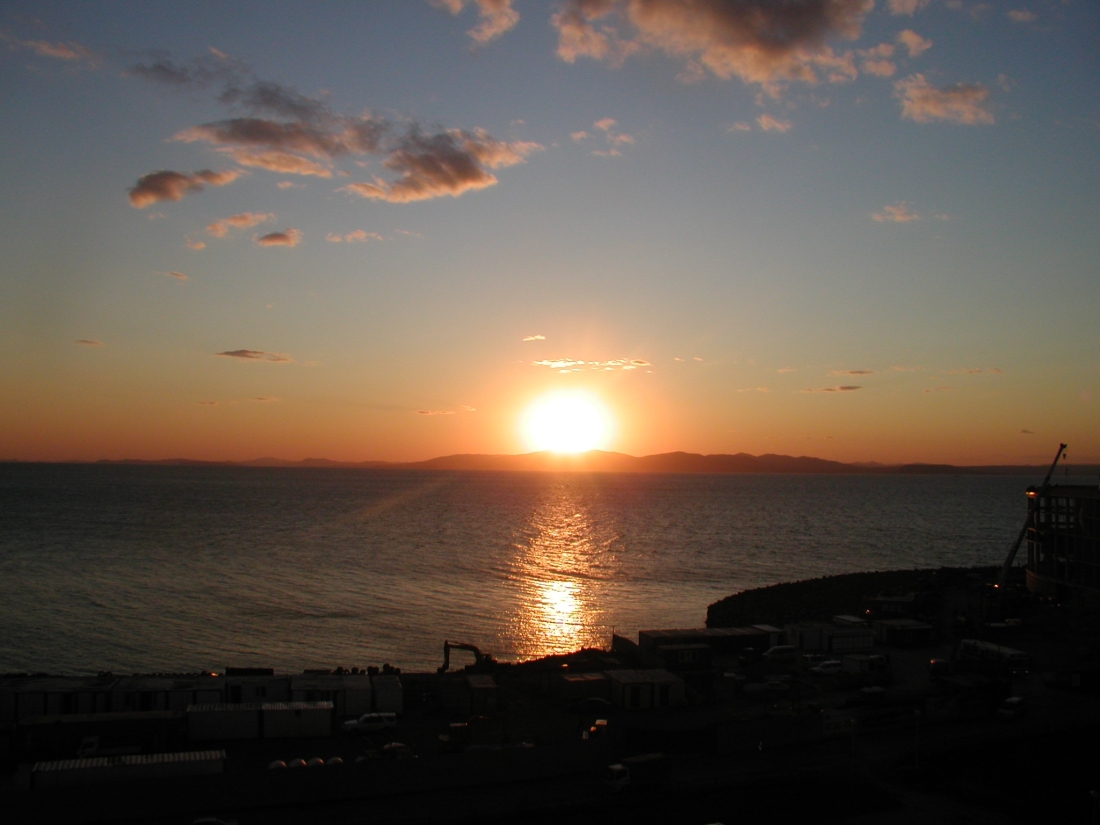 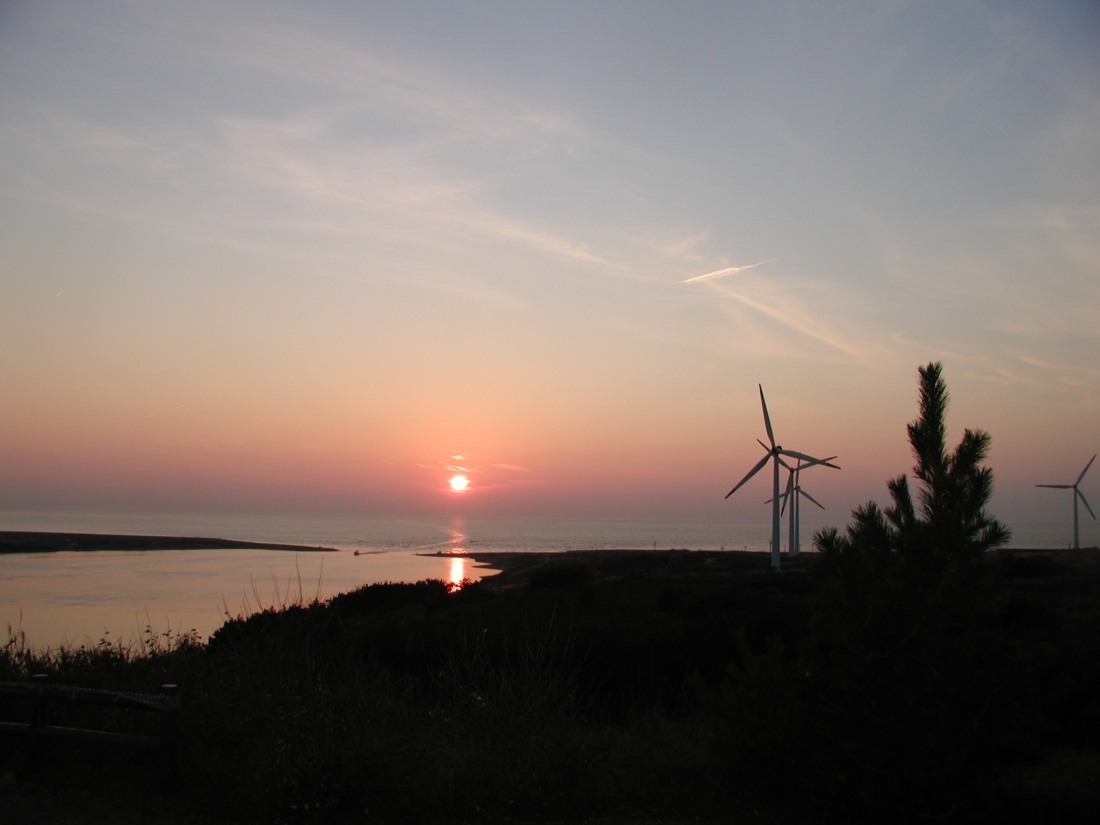 The next posting ‘Haiku by World Children : Impressions of Water’ appears on April 28.